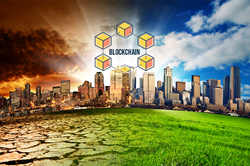 The Paris Agreement aims to maintain 1.5 degrees Celsius to prevent global warming. Developing countries are raising climate finance to reach the goal, the blockchain technology plays a crucial role in accurate monitoring, generation, and distribution that powers the fight against climate change.

Climate change has disrupted several fronts, from disturbing the food supply industry to the emission of harmful gases, it has warped the way our environment works. HashCash chief Raj Chowdhury highlights the potential of blockchain technology to back the fight against climate change.

Amid a global energy crisis, the Russia-Ukraine conflict, and rising inflation, climate change is an emerging complication that requires immediate attention. The sudden shift in the weather pattern is threatening food production, melting the arctic ice, and increasing the sea levels that might cause catastrophic flooding, along with the increase in unpredictable famines and cyclones worldwide.

19 countries signed a legally binding international treaty on climate change on 12th December 2015 popularly known as “The Paris Agreement.” The treaty aims to prevent global warming and limit it to 1.5 degrees Celsius. While the world is brainstorming climate actions to accelerate projects against climate change and similar issues, blockchain technology is leading the way by aiding the movement.

Blockchain technology has been gaining huge popularity over the past few years by disrupting several industries. One of the important aspects of developing powerful climate policies, and actions, is data accuracy and transparency crucial factors. The immutable, and transparent nature of blockchain empowers it to aid the fight against climate change. The technology has massive potential in supply chain management, clean energy, and renewables, along with forestry, agriculture, food, and many more.

“A global change requires global cooperation for better governance. Blockchain technology has the potential to share data around the world in real-time, without the fear of data tampering,” states Chowdhury. He has previously highlighted the potential of blockchain in the education industry, and its use in patent claims.

HashCash has been a global frontrunner winning top honors in blockchain development. The company enjoys strategic collaborations with global brands, deploying its acclaimed products in more than 26 nations across 6 continents. The HashCash-built crypto payment processor software is trending among retail merchants, contributing to further global growth in crypto adoption. The company recently announced special discounts on all its white-label products, including the ones that bridge banking and fintech.

The recent Climate Change Conference in Egypt, COP27 has highlighted solid plans and ambitions from several countries. The fight against climate change is never-ending especially when the world is dealing with inflation and conflicts. However, blockchain technology with its traceable, transparent, and irreversible nature has made it possible to solve global challenges such as climate change.

Raj Chowdhury is the Managing Director of HashCash Consultants and a Blockchain pioneer. Raj pioneered the first interbank Trade Finance and Remittance implementation of Blockchain Technology between two of the largest global banks. Raj is a prominent voice in the Blockchain and Cryptocurrency space and actively engages with policymakers in this area. He is a contributor to Economic Times, Business World, and CNNMoney and advises industry leaders in the adoption of Blockchain. He is a member of Asha Silicon Valley, a nonprofit committed to education for children in emerging countries. Author of the book ‘The Dark Secret of Silicon Valley’, Raj is an investor in blockchain and cryptocurrency companies and an active member of the philanthropic community.