NEAR Protocol toils in bearish conditions, but here’s why traders needn’t worry


Disclaimer: The findings of the following analysis are the sole opinions of the writer and should not be considered investment advice

Bitcoin bulls have fought valiantly to hold on to the $16.2k support level. Yet, the longer-term trend was bearish. Fear in the market was palpable, and large time-horizon buyers can look to wait for a shift in the trend before buying. However, volatility was still present for lower timeframe traders to capitalize on.

NEAR Protocol was one of the many altcoins which have been in a downtrend in recent months. Recovery was not yet in sight, although a move past $2.4 could instill investors with some confidence. 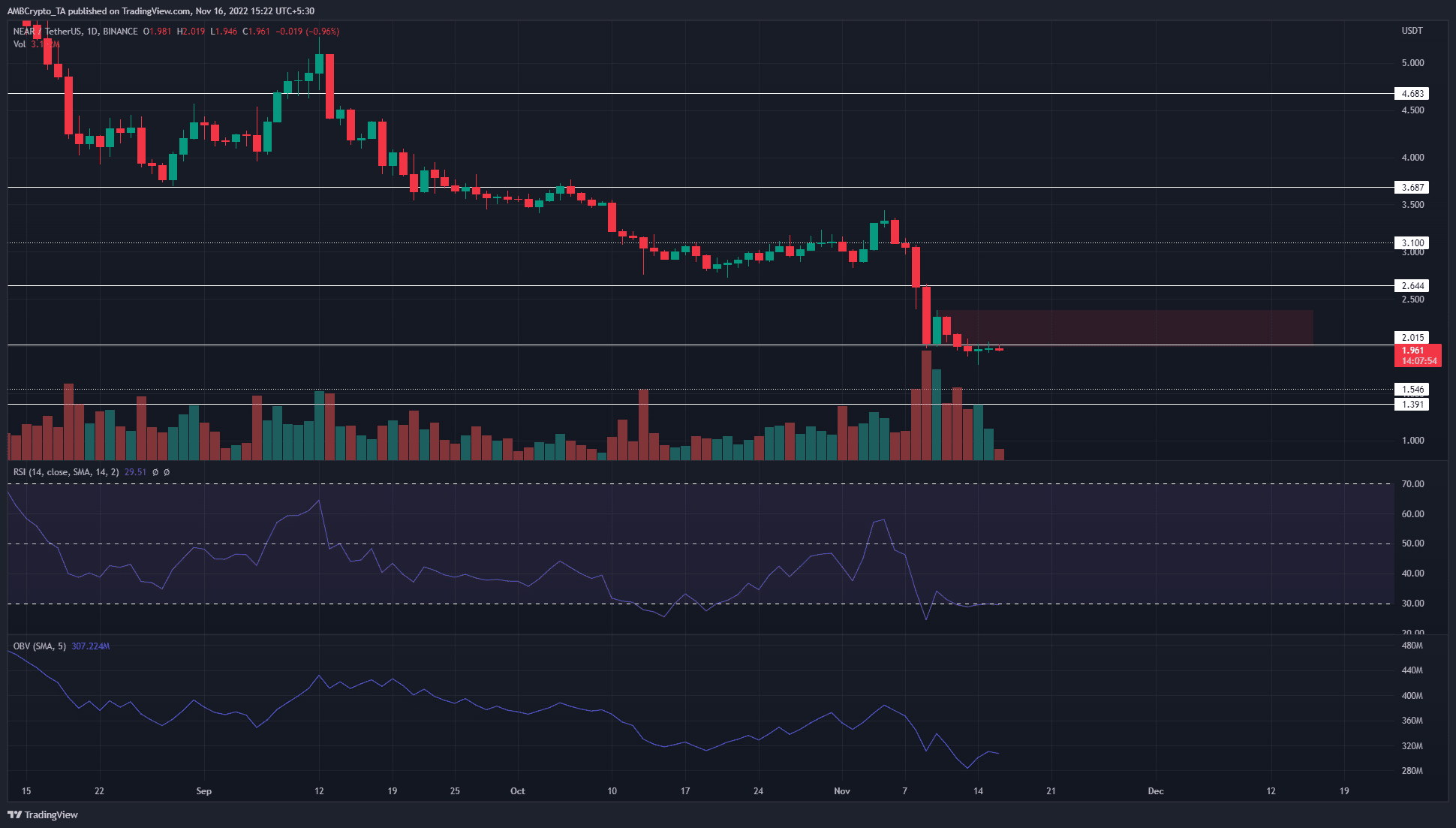 On the daily chart, it can be observed that the price has been in a downtrend since mid-August. At that time, the price descended beneath a series of higher lows that NEAR registered on its way upward. Breaking these levels flipped the higher timeframe bias to bearish. Since 20 August, NEAR has shed close to 53% of its value.

At the time of writing, a bearish order block was spotted in the $2-$2.4 region, highlighted by the red box. Another concerning factor for buyers was the high amount of trading volume in the past week when NEAR fell rapidly from near the $3.3 mark.

The RSI has been below neutral 50 since mid-September, and its brief foray into bullish territory in early November was swiftly thwarted. Alongside the RSI, the OBV has also sunk lower down the charts and has made another lower low.

Therefore, with selling pressure heavy and a bearish higher timeframe market structure as well, it was difficult for longer-term bulls to entertain hope. Further south at $1.8, $1.56, and $1.4 lie significant levels of support where buyers could scan lower timeframe charts for a buying opportunity.

Unless the $2.4 area was broken and $2 retested as support, the outlook for NEAR on higher timeframes would be bearish.

In November, the Open Interest behind NEAR Protocol in the futures market steadily declined. This was a trend that was seen for many altcoins across the market. The inference was that short positions were not building strength on the way down. Since November 10, the OI has been flat. This suggested that a strong lower timeframe trend was not yet in sight.

Since 12 November, short-term price charts showed NEAR had little volatility as it oscillated between $1.89 and $1.99 for the most part. A rally above $2.05 alongside a jump in Open Interest can be something to watch out for.

Meanwhile, the funding rate flipped from strongly negative on 10 November to somewhat positive on 11 November. This trend gradually took hold on more exchanges in the days since.

This meant that futures market participants were increasingly bullishly positioned. Was this a sign of impending bullish strength, or will the market face extreme pain yet again?

All eyes on FOMC, negative inflation could slash hopes for crypto