Bitcoin (BTC$19,398) starts the last week of “Uptober” in a firmly average mood as the trading range to end all trading ranges continues to stick.

After a welcome attempt to break out, BTC/USD remains bound to a narrow corridor now in place for weeks.

Some of the lowest volatility in history means that Bitcoin has found a temporary function as a stablecoin — even some major fiat currencies are currently more volatile.

The longer the status quo drags on, however, the more convinced commentators are that a major trend change will enter.

This week is as good as any, they argue — macroeconomic data, geopolitical instability and classic volatility around the monthly close are all factors at play when it comes to shaking up a decidedly boring Bitcoin market.

The bulls have their work cut out to make sure that such a breakout is to the upside. Multi-week trading ranges offer stiff resistance, while behind the scenes, miners are suggesting that a capitulation could yet take everyone by surprise sooner rather than later.

Cointelegraph takes a closer look at the current market setup and highlights five topics to bear in mind while tracking BTC price action this week.

Bitcoin offered some interesting price behavior into the Oct. 23 weekly close, BTC/USD seeing its largest “green” hourly candle in days before topping out at $19,700.

A retracement was already in progress at the close, which nonetheless managed to become Bitcoin’s highest since early September at around $19,580, data from Cointelegraph Markets Pro and TradingView shows. 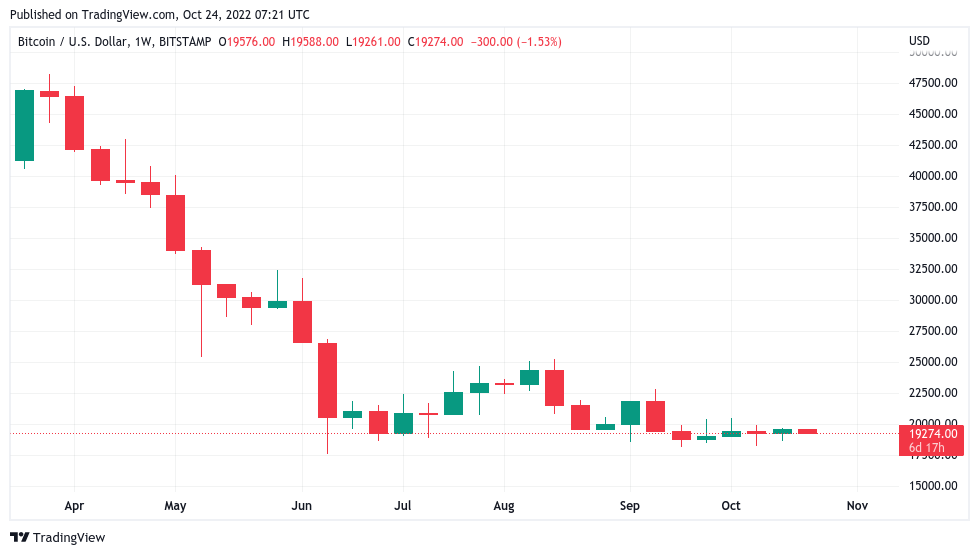 Optimism accompanied the move, which by Oct. 24 had dissipated to leave Bitcoin more or less where it had been before.

For Michaël van de Poppe, founder and CEO of trading firm Eight, the time has come to say goodbye to rangebound BTC.

“Bitcoin still stuck in this range,” he told Twitter followers the day prior:

Coming week is a large one with all the events, which almost makes it inevitable that we’ll break out of the range. I’m watching this final resistance. It needs to break, and then, the party can start.

“Liquidity from the range has been removed, or at least significantly reduced,” he summarized, adding that “Whales ($100k ~ $1M) are selling down.” 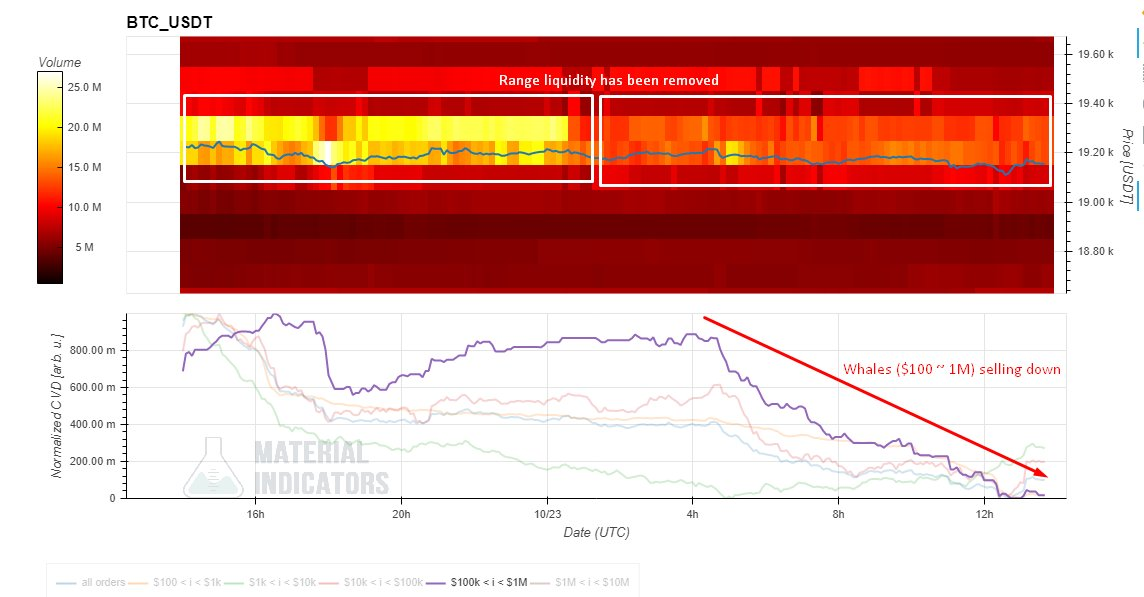 “First retest of the 2017 Top failed, but the sell wall that was forming resistance at that level has been diffused into a ladder upward,” it explained just before the weekly close. 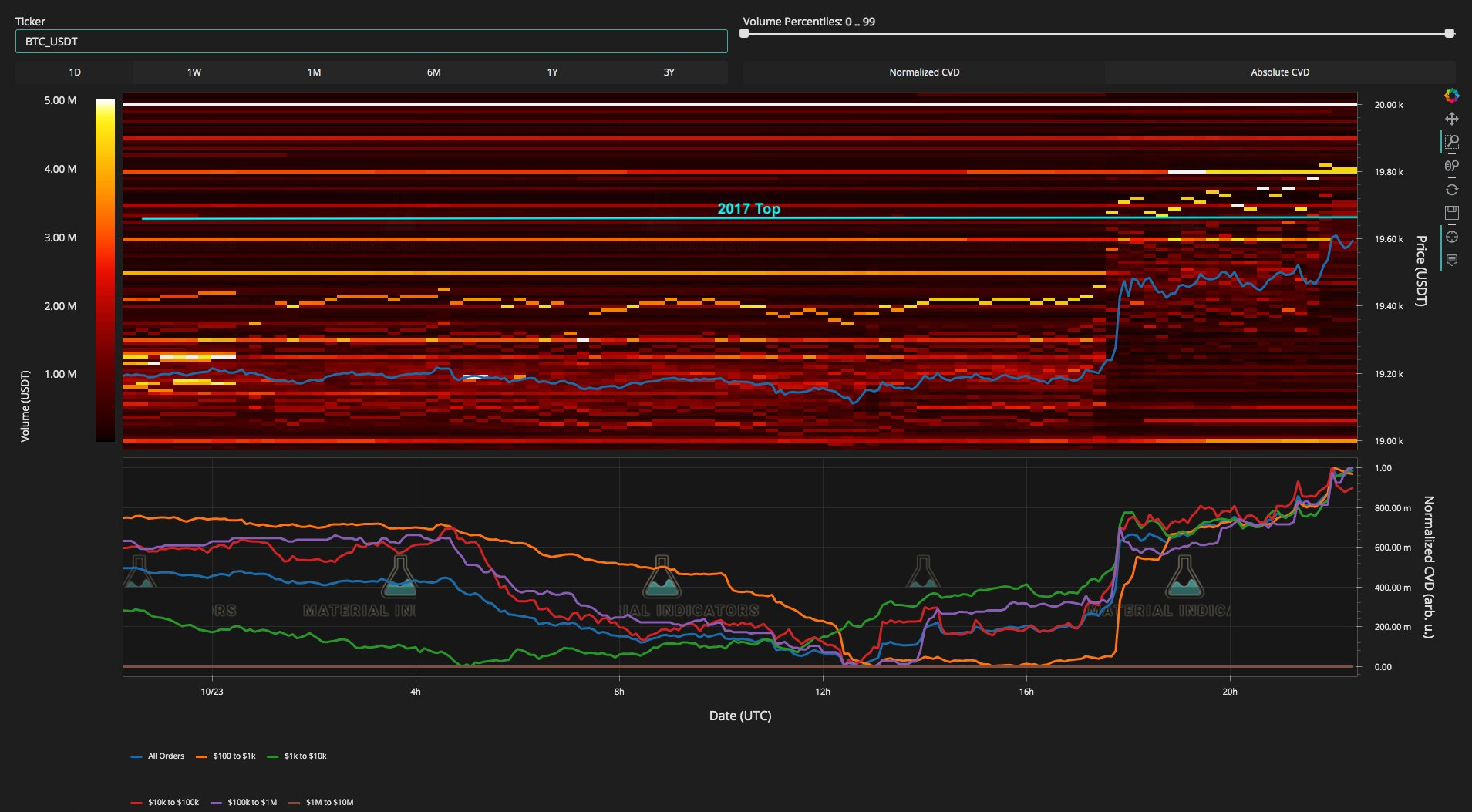 Popular trader and analyst Jackis, meanwhile, predicted a “wild” November for Bitcoin, while not being drawn on whether the move would be up or down.

“Bitcoin price has found an equilibrium around 19K. After a prolonged EQ there always comes a time of displacement,” he wrote over the weekend:

Watch for a prolonged period of price acceptance above/below 19,5K/18,5K and position accordingly.

Fed, ECB in focus in run-up to rate hike decision

Van de Poppe’s promise of a “large” week in terms of macroeconomic events will likely bear fruit on Oct. 28 with the release of the United States Personal Consumption Expenditures (PCE) Index for September.

While traditionally not as impactful to crypto markets as the Consumer Price Index (CPI), PCE nonetheless comes at a critical point this time around.

The week after will see the Federal Reserve meeting to decide on interest rate hikes based on specific data inputs including PCE and CPI.

The market currently overwhelmingly expects another 75-basis-point hike — keeping pressure on risk assets including Bitcoin — but last week already saw rumors of a softening of the Fed’s stance to come.

Any loosening of policy would be a boon to stocks, something which highly-correlated crypto markets would naturally benefit from.

We are now at month 11 and the FED is considering to stop the hiking of interest rates. 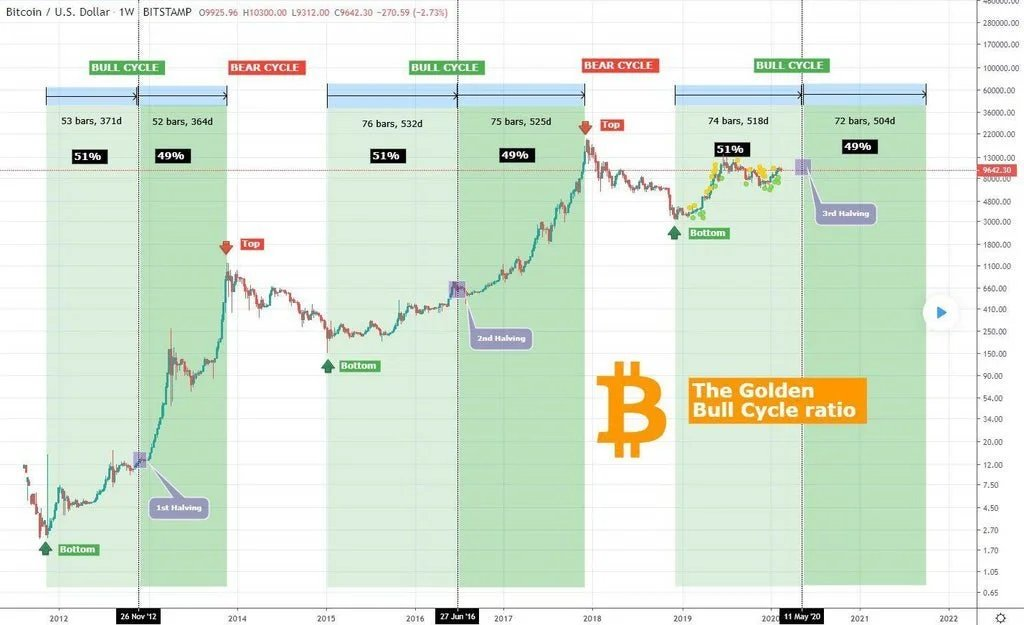 Summarizing expectations from the Fed, meanwhile, Charlie Bilello, founder and CEO of Compound Capital Advisors, confirmed that 75 basis points were not tipped to make a reappearance after early November.

CME Group’s FedWatch Tool had the chance of 75 basis points in November at 90.5% at the time of writing. 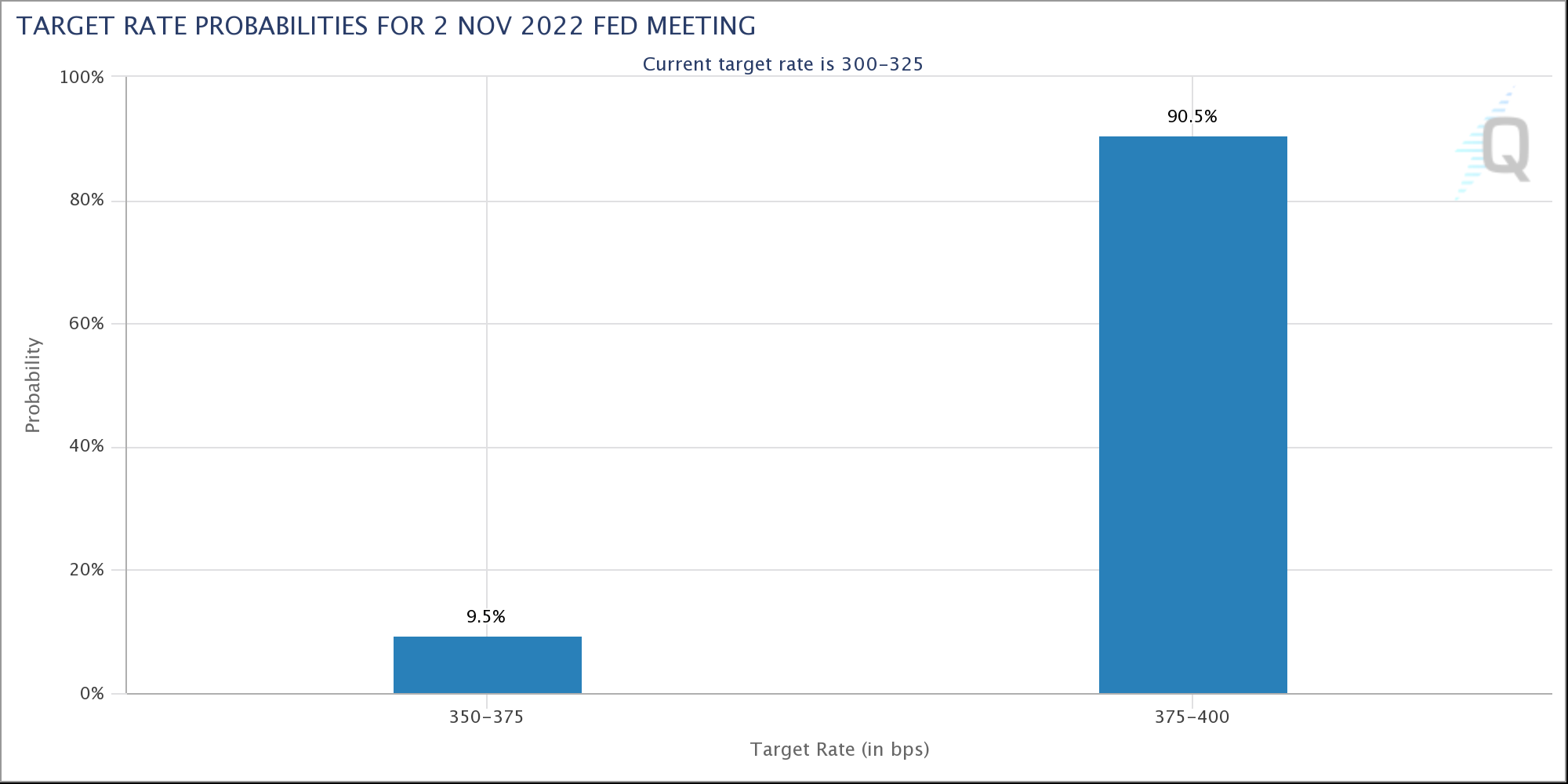 Beyond the United States, Oct. 27 will see a press conference from the European Central Bank, along with a speech from its president, Christine Lagarde.

The eurozone is currently dealing with record inflation, which has exceeded 20% in some EU member states. The ECB, however, has been decidedly slower than the Fed in responding with rate hikes.

“ECB on Thursday expected to deliver 75bps hike. However, delay on balance sheet reduction QT to when they reach neutral rate from 1.5 to 2% vs 0.75 current (at least second half of 2023),” economist Daniel Lacalle tweeted about the status quo:

The ECB is still behind the curve. It does not achieve its mandate nor calm markets.

Back to within Bitcoin and a sense of unease is brewing over network fundamentals and the health of the mining sector.

A look at the data offers unusual, yet not entirely welcome, conclusions — the hash rate may be at all-time highs, but the growth is likely unsustainable and will come at a cost.

This means that already thin profit margins are getting squeezed even further, with smaller miners at risk of having to abandon ship over lost financial incentives.

The entity adding hash rate can also be assumed to have large enough capitalization to still turn a profit despite the current state of the network.

Thinking about who this entity(s) is that feels that it’s advantageous to mine with BTC price down 70%, energy prices high, & hashprice at all-time lows. Wonder if its a large player(s) with excess energy or access to dirt-cheap energy.

With that in mind, commentator Steve Barbour arrived at an unusual conclusion.

“Guys, it is Russia. Russia is where the hashrate is going,” he argued:

Manufacturers have admitted to selling more ASICs to Russia than the US recently and guess what happens when you blow up pipelines and bottleneck energy? bitcoin fixes it.

While the entity or entities remain a mystery, the numbers speak for themselves. According to monitoring resource MiningPoolStats, the hash rate is currently above 270 exahashes per second (EH/s), while BTC.com offers an estimate of 259 EH/s.

Thanks to the added hash rate, difficulty increased by another 3.44% on Oct. 24, reaching yet another all-time high of 36.84 trillion.

So far, however, the old adage of “price follows hash rate” is yet to prove itself as concerns heighten over sustainability. 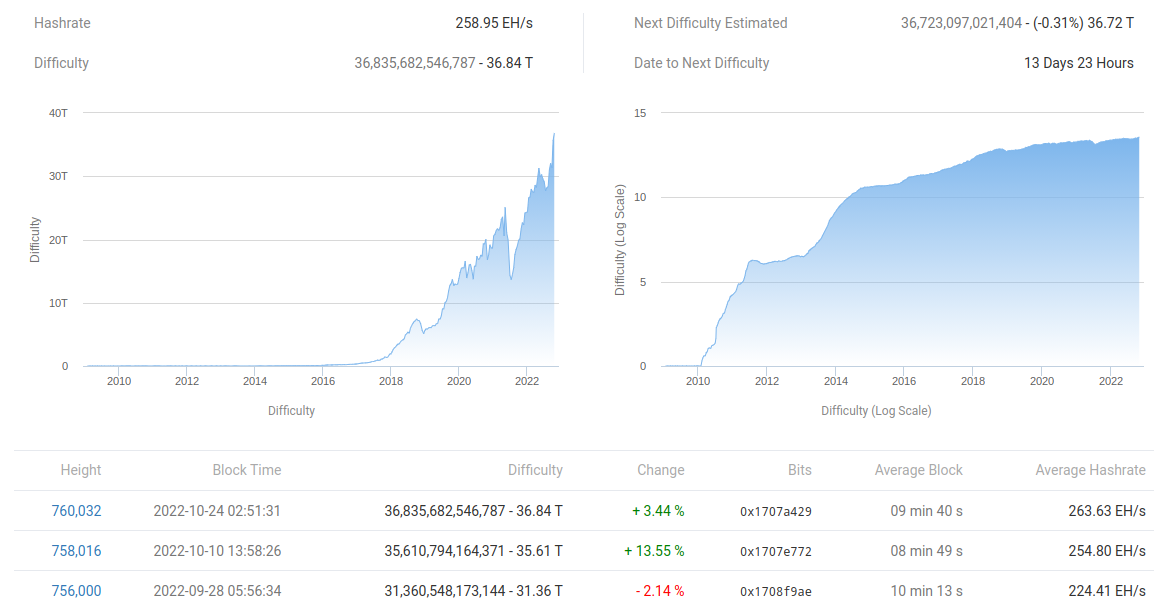 If miners have yet to delve into the world of capitulation, it is already “here” for the average Bitcoin hodler, one analytics entity believes.

Looking at data covering the BTC supply at a loss, trading resource Game of Trades concluded that the bear market pain had already entered.

The 30-day rolling moving average of BTC being held at a loss, not accounting for lost or long-term hodled coins, is now almost at all-time highs.

“Capitulations is here,” Game of Trades summarized on Twitter:

BTC total supply in loss 30-day moving average is now at its second highest level ever.

An accompanying chart from on-chain analytics firm Glassnode put the in-loss tally at over 8 million BTC. 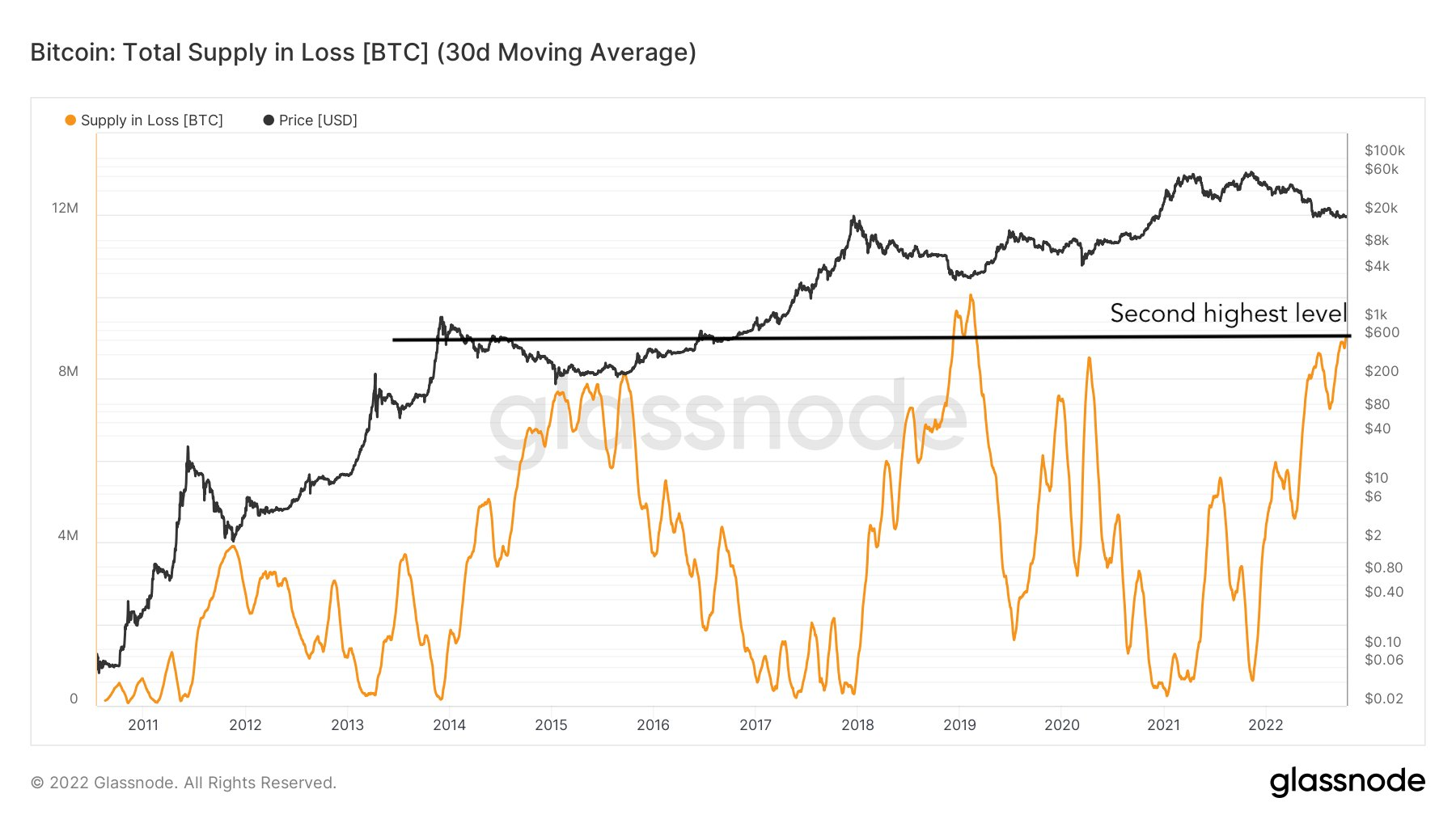 Responses highlighted that the figure is lower if using the circulating supply, with Game of Trades also acknowledging that the June lows of $17,600 still constituted the “main capitulation event.”

The supply issue is becoming more prescient — Glassnode also confirms that the amount of the BTC supply now dormant for at least five years is now higher than ever at 25.47%. 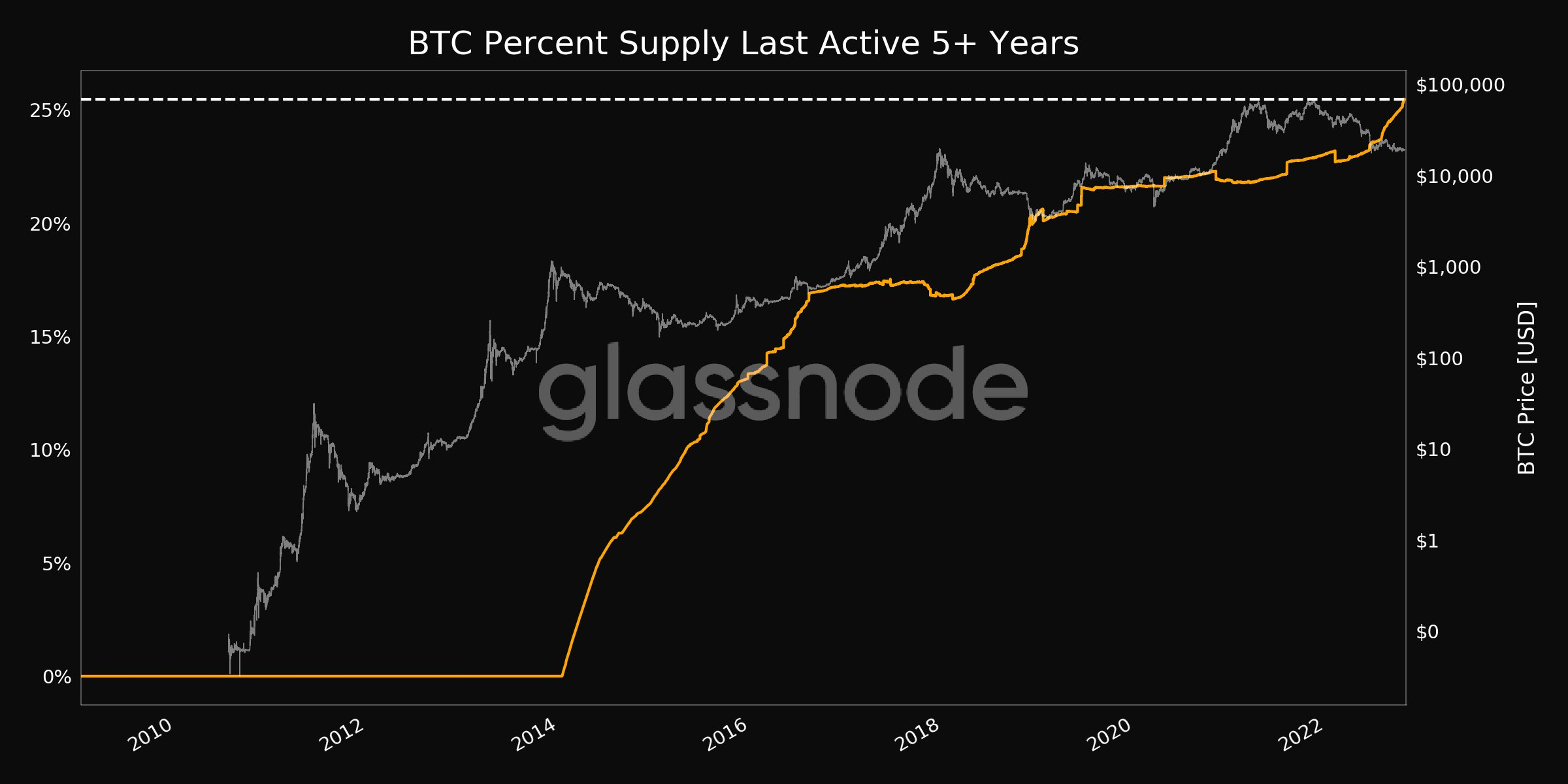 Little interest remains in “Uptober,” which by comparison has failed to deliver versus October 2021.

At current prices, BTC/USD is just 0.36% away from the start of the month — an expression of just how nonvolatile Bitcoin has become.

Data from data resource Coinglass shows that October 2022 is the flattest October on record percentage-wise and a shadow of last year, which delivered 40% gains.

Those hoping for a dramatic turnaround in November have their work cut out — last year saw a new all-time high, but the month ultimately closed with Bitcoin down 7.1%.