Buying the Dip with iCoinPro


Cryptocurrency investing is not for the faint of heart or risk-averse. Since the first block in Bitcoin’s network was mined in 2009, the flagship cryptocurrency has had a wild ride. Adopters had to hold on for dear life as the rollercoaster hit Everest-like highs and Death Valley lows.

Analysts can’t seem to come to a consensus on the ultimate fate of Bitcoin, and choosing the next breakout altcoin is little more than gambling. That’s why Justin Clark, co-founder of iCoinPro and developer of the Micro Profit system, engineered a trading software that focuses on movement in the market. Rather than trying to predict long-term momentum, Micro Profit software calculates patterns in daily trade volume to alert users to small windows of potential profit.

Bitcoin — and all cryptocurrencies — can be high-risk volatile assets. Clark, a self-professed risk-averse individual, was fascinated with that volatility.

“I was trying to somehow ride those waves of volatility to maximize profit and avoid the unbelievably punitive drawdowns that can occur where some of these coins go from being the best things since sliced bread to 95%, 99% drawdowns, some of them rather quickly,” said Clark. “We saw a dramatic one this year that was absolutely crazy. That was the angle that I came at it from and what I brought to our company, iCoinPro.” 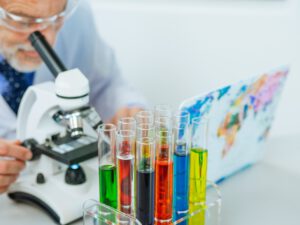 Getting into the Game

ICoinPro was founded in 2017 by Paul Des Souza, a Portugese self-professed “Bitcoin maximalist,” and Clark.

De Souza previously owned an advertising firm that he operated in South Africa. He was having trouble receiving payment for his company’s services through Paypal, and became an early adopter of Bitcoin, accepting the nascent cryptocurrency as payment.

According to Clark, De Souza had “beaten me over the head about it for several years,” but finally caught the Bitcoin bug when a friend began buying large amounts of the digital currency.

Bitcoin was trading at around $1200 when Clark bought his first coins in 2017.

Shortly after his first stint into the world of Bitcoin, iCoinPro was up and running. De Souza focused on the training programs to aid “newbies’” in their first ventures into the crypto world, while Clark developed algorithms designed to capture the movements of the unpredictable crypto market.

“Paul wanted to start an education and training company to teach people about how it worked, so they could understand how to navigate this brave new world,” Clark said.

The basic membership, which includes access to the iCoinPro forum and training is around $10. The basic plus membership costs around $40 and includes advanced training and access to some of the Micro Profit software. For about $100, users can purchase the premier subscription service, which “gives you everything — the kitchen sink,” said Clark. “So you have all the training, all the software, all the tools, and a live 24/7 chat box where our traders are in there talking about the markets and what they’re watching.”

Where Bitcoin, crypto, NFTs and the web3 infrastructure goes from here is hotly debated. As such, Clark is hesitant to make a prediction on the future of “highly speculative digital assets,” but is confident with the help of his trading software and the robust community created around iCoinPro, as long as there is movement in the market there is room to play. And where there is room to play, there is potential for profit.

Cardano Takes Solana NFT Traders, Here’s Why They Run from SOL to ADA

Cardano Takes Solana NFT Traders, Here's Why They Run from SOL to ADA

What The Zuck – A Web3 Metaverse Roadmap