MetaSolare is a new Web3 startup for “MusicFi”, “AnimeFi”, and “GameFi” whose co-founders include DJ Steve Aoki and Masato Matsuura, chairman of Japanese Entertainment Company Avex. Today the company made its official launch, releasing details of its upcoming Web3 project, which are available on its official website.

The world is on the verge of a paradigm shift from Web2 to Web3, and new genres of entertainment that make full use of NFTs and tokens are beginning to see wide adoption. But this new era needs a new type of thinking, and a new open architecture where users have the power, and are involved in making the decisions.

To adapt to this revolution requires more than just knowledge of the entertainment industry: it requires knowledge from the blockchain and financial worlds as well. MetaSolare has brought together experts from all these industries to form an entirely new type of Web3 entertainment project.

These experts include co-founder DJ Steve Aoki, one of the most well known members of the crypto community, as well as Masato Matsuura, the chairman of Avex, one of Japan’s biggest media and entertainment companies. Together, they are proud to work on the MetaSolare Blockchain Ecosystem. 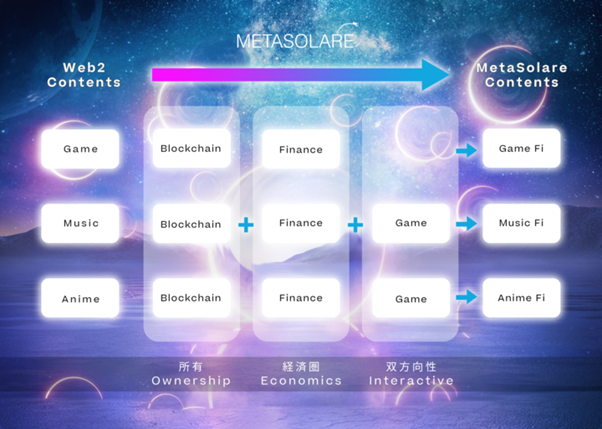 MetaSolare isn’t a project that uses content and IP simply as instruments for financial investment. Instead, it fuses these three elements in a way that allows for entirely new entertainment experiences in the fields of anime, gaming, and music, where everyone involved can create them together.

The words “Play to Earn” and “Play and Earn” are commonly used when talking about Blockchain games. MetaSolare looks to go a step further, to a society where games are part of everyday life.
In this world, everyone around the world can become a “co-creator”, helping to build a new future for gaming in any number of ways and from any number of places. Their passion for the game can become assets both tangible and intangible.

To make this possible, MetaSolare is working with a team of developers who have experience making some of the biggest video gaming titles in the world. Together, they’ll build a better world empowered by gaming, a dream that everyone can work towards together.

Combining anime and blockchain opens up new possibilities for users to get involved with animation in any number of ways. The MetaSolare project combined NFTs, tokens, and technology to create an entirely new form of animation in tandem with users and creators.

The experience of digitally owning part of your favorite anime can offer any number of new experiences and open the door to an entirely new funding model. And Metasolare will be there to offer you that world.

NFTs and tokens are a powerful tool to connect artists and fans, which allow for new types of ownership and ways to support creators. These new tools will change how music is made, and how stars are born.

MetaSolare will be creating crypto-native music artists, backed by DAOs and NFTs. MetaSolare token and NFT holders will be given the opportunity to be directly involved in the artists future: for example, token and NFT holders will help hold auditions to pick new artists and talents and help them get ready for their big debut, with livestreams being held at regular intervals to help show how far they’ve come.

MetaSolare’s team has deep connections in the global music scene, and in Asia particularly.  MetaSolare Co-Founder Steve Aoki is one of the most well-known DJs in the world, and Co-Founder Masato Matsuura is the chairman of Avex, one of Asia’s largest entertainment companies. These deep connections make them uniquely positioned to make the next generation of crypto-native music a reality.

MetaSolare’s core members are a group of leading experts from the entertainment, blockchain, and financial industries, who’ve come together as individuals to create a way to provide entirely new forms of entertainment, and build a new economy together with users and creators. 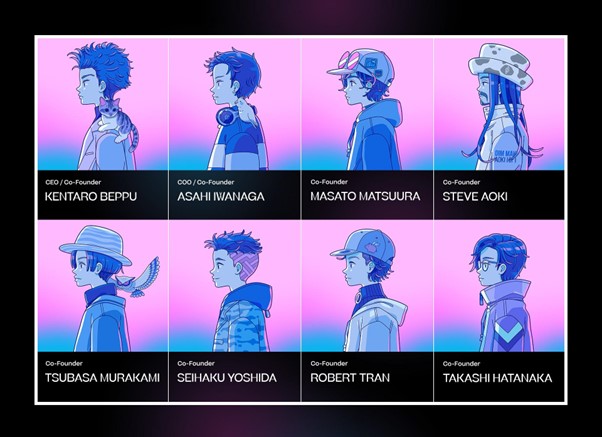 Formerly the national general manager of a major Japanese restaurant chain, and founder of his own IT marketing company. A well-known member of the Japanese investment community, he promotes financial literacy under the name “Ken Jinguji”.

Asahi is the Chief Operating Officer for MetaSolare, and former President & CEO of Avex Technologies. Previously, he spent three years publishing games on Steam at an international game publisher. He worked as a product manager in the broadcast/VOD entertainment industry at a NASDAQ-listed company. Asahi also attended college at the University of Wisconsin-Madison before helping found an e-commerce service at a Silicon Valley startup in 1999.

As of 6/24/2022, in order to focus full-time on the MetaSolare project, Asahi left his role as President of Avex Technologies and now serves as Avex’s Web3/Blockchain Technology advisor. As COO of the project, he will be involved in all important decisions.

Founder of Avex, one of Japan’s biggest entertainment companies. A hugely important figure in the history of modern Japanese music, he was instrumental in bringing dance music into Japan and has many connections with DJs and well-known figures all over the world.

Counting nearly 3 billion music streams to his name, Steve Aoki is a true visionary. Billboard described the 2x-GRAMMY-Nominated artist/DJ/producer and Dim Mak Records founder as “one of the most in-demand entertainers in the world.” A true renaissance man, Steve Aoki is also a fashion designer, author and entrepreneur.

A certified M&A Senior Expert and a certified Business Succession Senior Expert with the Kinzai Institute for Financial Affairs. In 2016, he began angel investing and building investment funds, participating in financing projects worth more than two billion USD in total. He now puts his experience to good use working with lawyers and tax accountants both in Japan and abroad to enhance corporate value through business development studies and M&A advisory services.

Seihaku Yoshida founded HashPort, Inc. in 2018 and ran the company as President. He has helped support numerous projects such as IOST, Enjin, Qtum, Tron, Tezos, and others in their efforts to expand into Japan. In 2020, he founded and ran HashPalette, Inc. as an NFT subsidiary of HashPort. HashPalette conducted Japan’s first IEO in 2021, attracting 22.4 billion yen for a billion yen offering.

Spent 23 years at Goldman Sachs, working at some of its most important divisions including the proprietary trading department and the Asian equity derivatives and quantitative trading division. Full-time director and CEO at a bio-venture company.

A passionate supporter of start-ups and pioneering thinkers, Shinichi has used his technical expertise to help multiple companies to launch with success.

He is an expert in a wide range of digital technology, including web development, mobile applications and blockchain.

In his previous role as CTO of Zen Global Limited, Shinichi built a blockchain-based donation platform and auditing service for charitable foundations, NPOs and NGOs in Malaysia, Britain, and multiple other countries.

He is currently CTO of Theo Design and Aipro Inc, and is researching methods of using digital technology to support entrepreneurs at Aoyama Gakuin University.

Teruaki joined Goldman Sachs’ finance division in 2005. Over the next 15 years he was responsible for monitoring P&L, balance sheets, and valuations of financial products in fixed income, equity derivatives, real estate and private equity.

After leaving Goldman Sachs in 2020, he moved on to serve as the CFO of a real estate venture company. There he gained experience in debt financing, monitoring performance of proprietary investments in real estate and private equities, and managing back-office functions. Currently, he is a venture capitalist, giving financial advice to a wide variety of start-up companies.

Teruaki has a bachelor’s degree in Economics from Rikkyo University and an MBA from Waseda Graduate School of Finance, Accounting and Law. He is a CFA Charterholder and has also passed the US CPA exam in the state of Washington.

In an age of individual excellence, MetaSolare is building a Web3 world with partners across industry boundaries.

More partners to be announced.

Two Tokens That Have The Potential Give You Financial Fruition

Two Tokens That Have The Potential Give You Financial Fruition

Art Industry News: The E.U. Paid $407,000 for a Metaverse Center. About Six People Came to Its Grand Debut + Other Stories

The Row is a members-only metaverse community