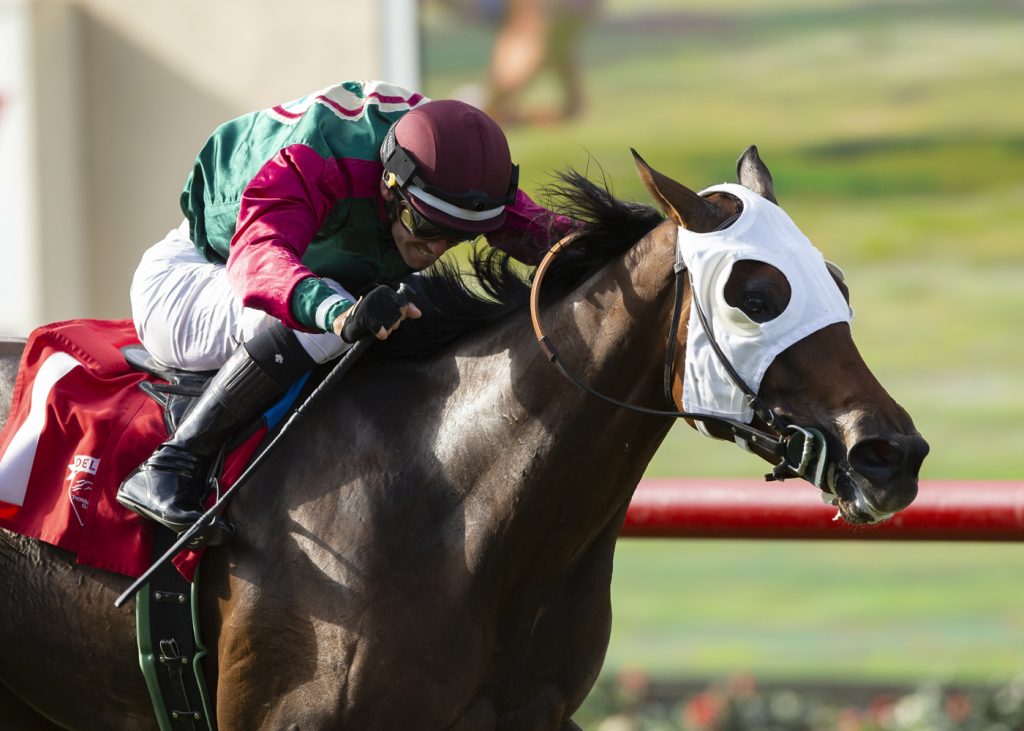 DEL MAR, Calif.— The Golden State Series continues at Del Mar Sunday when 10 Cal-breds line up in the $150,000 Solana Beach turf mile. It’s a mix of veteran Cal-bred fillies and mares against some newcomers on the scene.

The defending champion is back this year. Mr. and Mrs. Larry Williams’ Pulpit Rider returns to the scene of last year’s victory. She has failed to return to the winners circle in five starts since, but trainer Mike Puype thinks she deserves serious consideration Sunday.

“She’s ready to go,” Puype says. “She loves Del Mar, she loves the distance. We waited for this race so we’ll be ready to roll.”

The daughter of Lucky Pulpit has raced 10 times at Del Mar during her six year career, winning three and finishing in the money 50% of the time. She finish fifth in her last race, the $100,000 Fran’s Valentine up at Santa Anita in late May.

“She’s been in some pace-less races,” Puype says, “and just hasn’t had the right trips across town (at Santa Anita), so hopefully we’ll get some fractions to run at. Like I said, she always shows up at Del Mar.”

She’ll have to contend with Reddam Racing’s Eddie’s New Dream. The daughter of Square Eddie won the last time she faced Cal-breds in the Irish O’Brien, down the hill at Santa Anita in March. She then plunged into Graded stakes company, running second to Canoodling in the G3 Wilshire and fifth in the G1 Gamely. Trainer Ben Cecil likes having her back with Cal-breds.

“I think this is a good spot,” Cecil says. “She’s been going against open company. I think the distance is good, going the mile, so I’m hopeful.”

Eddie’s New Dream ran second in a second-level allowance on opening weekend at Del Mar and Cecil says she may not have been at peak form.

“I gave her a little bit of a breather after the race before last,” Cecil says, “and I may have been a little easy on her. She may have come up a little bit short. I still think she ran very well.”

Harris Farms’ All Dialed In started her career last December and broke her maiden in January. She’s coming into the Solana Beach on a two-race win streak. Both of the races were entry-level allowances, one against Cal-breds, the other in open company. She’s only run once on the turf, finishing fifth in a sprint, and trainer Sean McCarthy is not ready to blame it on the grass.

“That was too short for her so I’m not going to say the grass cost her,” McCarthy said. “This is a different style race. The pace quickens, it doesn’t back up to you like on the dirt. I think our style is very, very strong in this situation and I look for a good effort.”

The Solana Beach, named after Del Mar’s neighbor to the north, is the eighth race on the 10-race Sunday card.

Notes: Eclipse Thoroughbred Partners Sister Otoole came out of her win in Friday’s $100,000 CTT & TOC Stakes in good order according to assistant trainer Alice Clapham. Sister Otoole was one of two horses trainer H. Graham Motion sent out from his east coast base for the stakes races at Del Mar this weekend. The other is Spendarella, favorite in the G1 Del Mar Oaks today…Jockey Edwin Maldonado is quietly having a nice meet. He notched his ninth win of the summer aboard longshot R Doc in the fourth race Friday. That moves him into fifth place in the jockey standings. R Doc ended up paying $76.60…Notable workouts for Saturday: Dirt – Desert Dawn (4f, :50.40); Master Piece (4f, :49.00); Slow Down Andy (4f, :49.00); Ce Ce (5f,:59.40), and Taiba (6f 1:10.80). A total of 196 horses put in official works on Saturday.

Revolutux, Chiliz, and Shiba Inu: Three Altcoins That Might Save You from the Crypto Winter

Mark Zuckerberg responds to metaverse memes with a redesign

Mark Zuckerberg responds to metaverse memes with a redesign

FTX and their links to blockchain gaming