Bitcoin funding rates have been on a bearish trend in recent months. It has now spent one of its longest stretches in neutral and below neutral territory. But even with the recovering prices and sentiment in the crypto space, the funding rates have refused to mirror the trend. Instead, it has spent another week below neutral, painting a grim picture of how traders are viewing the market presently.

Traders Do Not Expect Recovery

Bitcoin funding rates are a good indication of when traders expect some form of recovery in the coming days. Since the market crash in June, the rate has refused to record any significant positive momentum, indicating that bitcoin traders do not expect a recovery going forward.

This comes even when the price of bitcoin has recently tested $25,000. Over the last week, the digital asset was able to add around $4,000 to its value, and even the declines have seen the digital assets record higher lows. Despite this, perp traders have refused to budge.

At this point, it is a herculean task trying to determine if perp traders are just bored in the market or don’t expect any kind of significant recovery in the price of BTC. Mostly, their exposure to the market has been short as they continue to shy away from long trades. 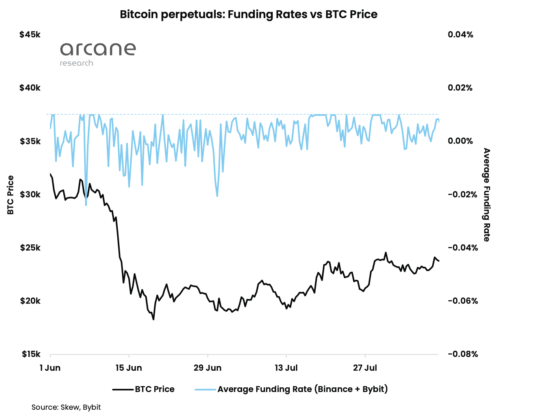 This has led to the bitcoin derivatives market grinding to a crawl. BTC funding rates have now spent the first two weeks of August below neutral, and exceptions are they will continue to remain so for the rest of the month.

At the start of the market recovery, the bitcoin open interest had been on a dramatic rise, suggesting that a short squeeze had led to the increase in price. It had maintained a respectable position after that, but the last week has seen a turn in the tide.

The decline in Bitcoin open interest also coincided with the fall below neutral in funding rates. This suggests that while the market may be in a slightly bullish state, traders are expecting the price to tank. However, the move to Ethereum shows that the same traders are predicting a high rise in the price of Ethereum following the Merge.

Here’s What’s Next for Bitcoin, Ethereum, Binance Coin and a Leading Dogecoin Rival, According to Crypto Trader

The next big thing in personal technology is underway

The next big thing in personal technology is underway

Three Cryptocurrencies That Could Yield Massive Returns In 2023 – Dogecoin, The Sandbox, And Big Eyes Coin